We don’t typically go to the Silver Star area because of the crowds and trail conditions (full of scree and rocks), but we had never gone to the Indian Pits and wanted to see them.  The parking area was filled so we had to park further down the road, but it wasn’t an issue.

For whatever reason we found the trail to be easily ascended despite the scree and rocks, which was good of course.  There were quite a few people on the trail but it wasn’t too bad.  The first thing we noticed after breaking out of the forest canopy was the huge display of flowers, and I mean an amazing display of color! 🙂  With the flowers came all the flying insects, but only the horse flies were really annoying.

As expected, the views on the Silver Star trail are amazing, but it’s never impressive to look west and see all the clear cuts.  Clark County is just being over-logged, and it’s a crime to see such devastation. 😦  At about 3 miles we turned onto the Indian Pits trail and ascended.  When we broke out of the forest canopy in this area Mt. Hood and Mt. Jefferson were there to greet us!  The trail then descends, and is overgrown with low growing vegetation.  My impression is that hikers don’t go here. 🙂   You descend for a while and at one point you will see Mt. Adams when you look north!  The end of the descent is marked by a forested area, where the trail becomes more obvious.  You will then come out of the forested area by ascending a steep slope and pushing your way through overgrown brush.  Look out for what’s below that you can’t see as you might trip over some rocks.

When you break out into the open you will be greeted, looking north, by one of the most spectacular views, of Mt. St. Helens, Mt. Rainier and Mt. Adams.  The view here is breathtaking!!!  There is a bit more ascent before the trail levels out and turns north.  There are two large rock outcroppings here.  you must walk past these rocks, on a partially obscured but obvious trail.  You’ll then climb down to a rock field where the Indian Pits are located.  The pits are very interesting, and I stopped to take many pictures.  The view from this area is also breathtaking!  I explored this area a while as the terrain is easy to get around.  We saw no hikers in this area but looked up towards Silver Star and always saw people there.

I took many pictures on the return hike, and also descended slowly down the rocky trail.  It was a fantastic day to be in this area! 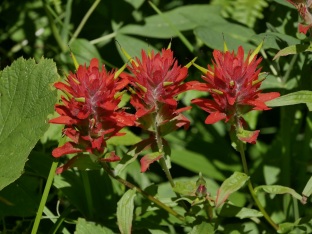 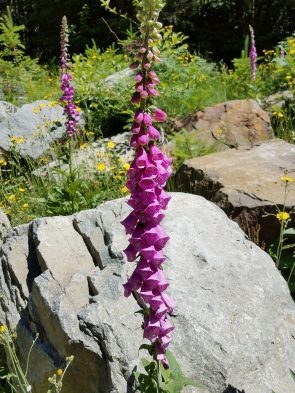 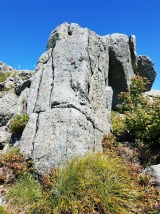 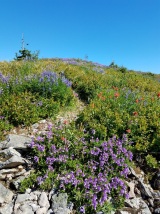 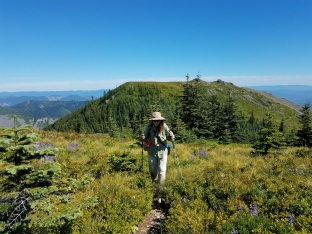 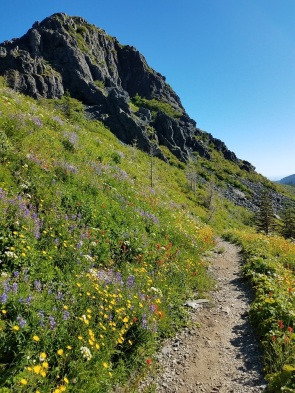 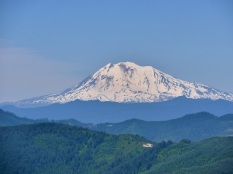 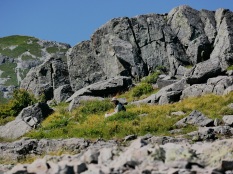