I’d like to apologize for taking so much time to write these blog updates in a timely fashion.  I’ve been hiking often (12 hikes in the past two weeks that haven’t been entered yet) and between home events and being tired I haven’t spent the time to write in the blog.  I’ve also been spending a huge amount of time preparing for my PCT section hike this summer, and have made significant progress in both purchases and trying to meet base weight goals.

The hike today was a last minute decision to stay close to home due to a late start.  I really love the Frenchmen’s Bar area but am not fond of the asphalted trails due to the harshness on my feet.

I began my hike heading on the Frenchmen’s Bar trail toward Vancouver Lake.  Along the way I stopped and took some pictures at the Washington DNR area where some nice ponds reside.  No waterfowl hunters were there, which is why I stopped to take pictures.  I continued along this paved trail and took some pictures when I reached Vancouver Lake.  Such a huge number of birds wintering in this area.  I kept waiting to feel a package drop from above, and hit me in the head, but no poop fell on me this day. 🙂  The water level at Vancouver Lake was much higher than expected!

I then turned around and hiked the two miles to Frenchmen’s Bar.  The weather turned much worse while returning to this area and I really enjoyed the rain and wind!  Hiking south on the sidewalk I was taken aback that a large covered area had been removed! 😦  This covered area was kind of an iconic landmark on the property, and a source of many nice pictures.

Next I walked north along the beach and just enjoyed the view of the Columbia River and large ships.  There was a concrete pier on the beach that was quite out of place, and I wonder how it got here.  Continuing my walk I noticed something pop out of the water; a seal!  As soon as it spotted me it took the plunge back under the water.  I spent five minutes trying to see where it would pop up next.  It must have been 200 yards upstream from me when it emerged again.   So awesome to see and much too quick to take a picture.

It wasn’t long before I turned inland to get back to the car and end the hike.  A great day to be outside! 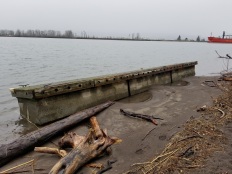