My wife’s father was celebrating his 95th birthday and wanted his family to help him celebrate!  Unfortunately, the location where he spends the winter is in Ft. Lauderdale Florida, and it doesn’t get much further for us than that.  As a consequence of the travel we only slept for two of the four nights of this trip. 😦   That said, we had some fantastic food and caught up with my wife’s relatives.  It ended up being a great time and was well worth the inconvenience.

Not having missed a weekend hike in almost 11 years, I investigated which trail was in close proximity and would be the best choice.  I was so pleased to find that The Florida Trail (about 1300 miles in length) was accessible within about 45 minutes of our hotel! 🙂  I had no idea what this section, north of the Alligator Alley highway, offered for scenery, but would soon find out.

The day was very hot, at about 90 degrees, and very humid.  Add to that no cover from the sun and you have a difficult hiking situation that could result in heat exhaustion, if not prepared.  My two youngest sons went along with me for this hike.

We parked at an extremely large parking area, which had only a few cars parked there.  The trail was well marked and the path led to a high fence whose gate was closed.  It kind of looked like a prison.  We opened the gate and followed the road, which it turns out was the Florida Trail.  The trail was very well marked and there was no getting lost in this area.  There was even a sign, that contained a map, that indicated we should take a picture of it on our smartphone!

On our way north there was a water filled canal on our left.  There were some nice views of the water and I was constantly looking to see if there were alligators.  To my surprise, it wasn’t long before we saw our first wild alligator ever!!! 🙂  It was so surreal to see this prehistoric animal just laying in the water and looking out at us.  At first it looked like a long tire, but it became evident it was much larger.  I’d estimate the alligator to be 6-8 feet in length.  It didn’t even flinch when we saw it.

Along the way we saw many flowers, birds and a large number of huge cricket-like insects.  I was especially enjoying all the palm trees and grassy areas along the trail.  We soon glimpsed another alligator that was a bit more covert.  Again, it didn’t move when we spotted it, and we weren’t especially scared as it would have had to climb up the canal to get to the road/trail, or about 20-30 feet.  We were always scanning and had hyper awareness in case we needed to run away quickly.

Although it was hot and humid I found the trail and scenery fantastic.  All was well until my older son indicated he ran out of water, and apparently only brought along one pint of water.  Argh, really, that’s all you brought?  Next, my youngest son was being affected by the heat and indicated he was having heat exhaustion like symptoms.   He had brought a liter of water but was very concerned.  A panic attack set in and I indicated I had Endurolytes Electrolyte capsules.  He took one and quickly calmed down.  I was feeling very good and offered one liter of Powerade for them to share.

We turned around and headed back immediately, making sure to keep hydrated along the way.  We didn’t see the alligators on the way back but did meet a couple that was hiking along the trail.   The few miles went quickly and everyone was glad to see the car.  I turned the air conditioning to high and drove back.  Along the way I stopped at a rest area so my sons could fill up their water bottles.  They both took a swig of the water and almost threw it up!  They said the water taste was horrible.  I decided not to drink the water they brought back to me.

Definitely an interesting day and an important lesson learned regarding hiking in the heat.  Me and my youngest son had burned hands as it was the only skin exposed to the sun.  My middle son had kept his hands in his pockets, and was spared having sunburn. 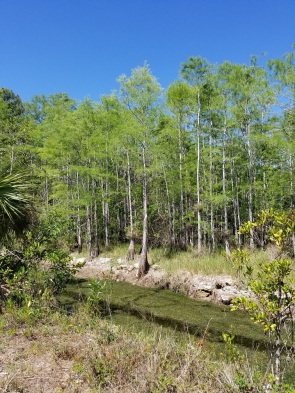 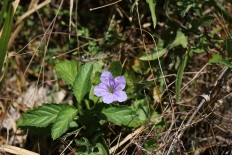 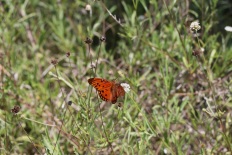