I drove into the parking area north of Round Lake and started walking clockwise around the park.  The view of Round Lake was ominous, at the beginning of the day, and I stopped to take a picture.  I then hiked up to the Natural Area and walked around it.  I love this Natural Area, especially when the Camas Flower is in bloom!

I continued walking around the northern end of the park and took some time to look at the very large home development going in, just north of the park.  This used to be a gorgeous treed area, with trails, but has now been leveled for future homes.  It’s a depressing sight since I remember it when it was all forested. 😦

I was going to hike on a trail located at the east end of the park but it is now a “Bike Only” trail.  It’s too bad as this was such a nice trail, and the longest in the park.  Taking an alternate road I reached the Lower falls and then took a trail to the southern boundary of the park.  I spent some time walking around the trail system located here.

Hiking back north I went along Lacamas Creek and visited the Upper Falls.  I then wound around to the southwestern side of Round Lake and then turned left into another trail system.  This trail system doesn’t appear to be in the park boundary but it doesn’t appear to be the target of any future development.  There are plenty of trails here, and they’re used mostly for biking.  There’s plenty of the invasive ivy all over the ground and climbing the trees.  Maybe some day it will be cleaned up?

Next I head back north toward my car, which skirts along the west side of Round Lake.  It was a fantastic day with plenty of fresh air!  I included a map of where I hiked since this makes my description of the hike more obvious. 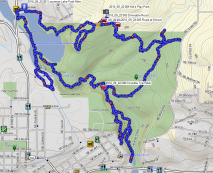 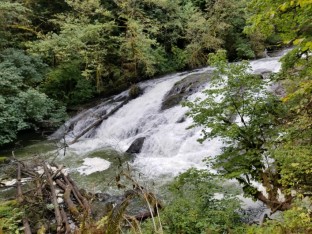