I’ve been wanting to go to the Willapa Hills Rails-to-Trails hike for a while, and today was a wonderful rainy day to do just that!  I wanted to hike west from the town of Pe Ell, as there is a nice parking area there.  We used Google Maps to get the shortest/fastest time for our drive, but we ended up taking the long way there.  The drive turned out to be about 1.5 hours, which was more than expected.  Lucky for us I had to stop for a pee and found a forest road we could hike in the future.  It turns out that this new forest road is on private logging land, but they allow hikers to walk in! 🙂

So we finally make it to the parking area in Pe Ell and were pleased to see no other cars.  It was also nice to see that this TH had a clean flushing toilet. and sink.  We definitely made use of this. haha  This is the first hike since my SI joint cortisone shot and it turned out okay.  At first there was a lot of pressure at the spot where the shot was given but it slowly got better as we walked.  I did take it slowly as I was concerned there would be sharp pains, but it never happened. 🙂

The Willapa Hills Trail in this area is primarily covered with small rocks that don’t slip around.  The start of the trail is in town but we quickly left it and began walking through farm land.  At about a 1/2 mile out we crossed the brand new bridge over the Chehalis River.  We had been at this bridge before but it was not passable then.  Today we crossed the well built tressel bridge and were rewarded with great views of the river.

After crossing the bridge the trail followed Rock Creek, for the remainder of the hike.  Rock Creek is abundant with stellar views!  Plenty of rapids were seen and I took plenty of pictures.  This section of the Willapa Hills Trail are extremely scenic, and the lack of people gave us plenty of solitude.  We only saw one person, with their dog, at the very end of the hike.

Most people that hike this appear to be locals, from our past experiences.  The majority are also riding bikes, from what I remember.  The people that are walking are close to the more populated areas and typically had a dog.  We actually like hiking this trail as it’s so different from other hikes we do.  In addition, the hike is mostly located at lower elevations and is hikeable in the bad weather and winter months. 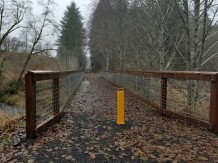 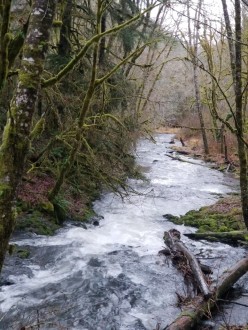 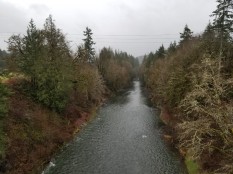 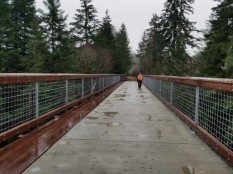