I looked out the window and saw plenty of wind and thought I should probably stay in an area that’s more in the open rather than under trees. So why not go back to the Vancouver Lake area in Frenchman’s Bar and spend yet another day in this beautiful area. I got here and it’s extremely crowded. It looks to me like they’re getting ready for some kind of boat race and there are probably a good dozen tents that have been constructed. They’re also playing plenty of loud music and setting up areas for the different teams that are going against one another. This is kind of what I expected at this time of year! They’ve also got a huge crew from Clark County parks that is mowing the grass on the field and trimming all the vegetation, and using blowers to clean up the parking lot, so this is definitely a big thing that’s coming here.

I’m in full rain gear and hotter than hell. It’s in the mid/high 60s and the wind has died down where I’m at, and I’m burning up. I’m just going to go along the Vancouver Lake shoreline and them to go up north onto the North Trail, and lounge around there for a little while. Then I’ll probably just head out onto the Frenchman’s Bar Trail where it’s in the open, and safe, from just about all weather except for probably lightning.

I just bumped into a gentleman who said that there’s some kind of high school finals for boat racing and that they’ll be tournaments and events going on through the end of the school year. He also mentioned that he just saw a coyote in the field but it was long gone. H also saw a peacock out here and otters in the water. I can believe the Otters but I’ve never seen a peacock, but then what do I know.

I’m finally north of the beach and the family recreational area, and it’s a lot more peaceful and a lot less noise, and it’s feeling much more like a hiking experience. There are a whole bunch of  native roses along the sides of the trail and they’re quite beautiful! They’re not as elegant as what’s in an arboretum or Rose Garden but they’re extremely beautiful and very frail looking. What’s really interesting is they always seem to be the color pink.  but I don’t know why. I think the same goes for the native rhododendrons that grow around here?

There’s a very nice new bench just before you enter the Vancouver Lake North Trail and there’s a little plaque that dedicates the bench to a Dorothy langendorf.  The plaque says “A trail is a place to enjoy our walk and to find a bench to rest and talk”.   I like that!   A nice tribute to probably what was a wonderful person.

The mosquitoes here have decided to become a little more aggressive and I’m not surprised. I carry a little spray bottle of picardin with me and I believe it’s made by Sawyer. It seems to have done the trick and the mosquitoes no longer find me very appealing. You just have to put up with the smell which isn’t that bad.

I’ve decided to go into the shillapoo Wildlife Area as I think it’s late enough in the year, at least from what I can glean from the Washington State website.   I would have really appreciated a sign saying that people are not allowed in between particular dates but there isn’t one.   It’s a very beautiful area and there’s still plenty of birds here. Unfortunately, with the constant drizzle, I didn’t opt to bring my camera with a long lens on it. 😦

The shillapoo north unit that I’ve entered into is actually a disabled Hunter preference area, at least for the first section, and there’s a gravel walkway that goes to a blind.   After the blind it’s just a a road that’s grass covered.   The grass got longer as I walked further down the road,  and I’d I opted to turn around after about a half a mile.   It was nice being out here because the wind picked up and the bugs are less prevalent.

I’ve been thinking a lot about my PCT backpack and backpacking my son the summer and have decided that I’m not well prepared for either of those events. I really need to get some food that I would enjoy on the trail as last year on the PCT I ate almost nothing that I brought with me. I have started researching some of the foods that could be on the list but I really need to try them out and then pick them up at the grocery store or order them. What’s more, is that I know if I’m not prepared my son is in even worse shape, and that’s not going to end up well if we go on a multiple-day backpacking trip. Ugh.

The second issue I’m thinking about is whether or not the PCT will be clear of snow when it’s my time to go out there. I’m not anticipating it will be completely snow free but it would be nice to know that I don’t need any special skills to camp out.   I’m really more of a  fair weather Backpacker, but I’m ready for rain, as you’d expect.   For these reasons I prefer backpacking in the summer rather than trying to do the entire Trail at once. Anyway I look at it, it will definitely be an adventure, as last year was, and that will be something to talk about as long as I’m still alive. Haha

It’s clearing up so I took off my rain pants and thought that that’s the least I could do. And of course then it started raining, and it increased in intensity, and it was pouring by the time I got back to the car. haha 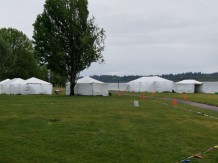 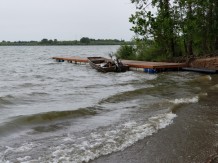 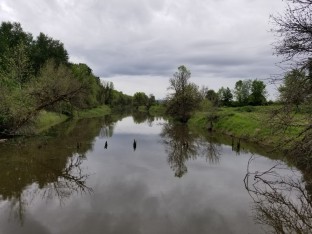