Since it was Friday my son and I decided to try hiking to Angel’s Rest and then head out to Devil’s Rest.  I haven’t done this hike in years, and my son has never hiked it.  We drove to the parking area and got the last spot (lower lot), and felt very fortunate!

This is my first time in the Columbia River Gorge since the fire, a couple years ago.  I was interested to see just how damaged the trail was.  The trail pretty much just climbs up for about 2.25 miles.  We passed by a beautiful stream, with a nice bridge crossing.  As we ascended some views were peeking out into the gorge.  It wasn’t until we hit the switchbacks, below Angel’s Rest, that the evidence of the burn became apparent.  However, the vegetation in this area was extremely thick and the flowers were in profusion!  The number of people on the trail was significant.  People were passing by very often, and it was evident that most other hikers don’t know about trail etiquette.  Ugh!

As we got closer to Angel’s Rest the views became breathtaking!  The Columbia Gorge was…..gorgeous, and the flowers were in bloom everywhere!  I simply couldn’t take enough pictures, and the photos will never do this justice.  The views were worth dealing with the crowds, at least on this nice weekday.

We made the turnoff and headed out to Angel’s Rest.  There’s a small scramble to get up to Angel’s Rest, and we don’t like it, but it’s not too bad.  Angel’s Rest was crowded, and it felt like a zoo, but we got the pictures we wanted.  We even had some food and hydration at this great resting stop.  Many of the people left before us, and it felt a bit less crowded, for a few minutes.

Moving on, we took the trail heading towards Devil’s Rest.  It’s not an obvious trail that will lead there, and there’s no sign.  We continued to see the effects of the burn, and it looks pretty bad in spots.  However, the ground level foliage is very dense, and the flowers continued to be amazing.  We did notice some Poison Oak, and it will be thick and a nuisance, in the coming years! 😦

There was so much solitude on the way back down the Devi’s Rest trail.  This is what I needed.  Unfortunately, getting back on the Angel’s Rest trail only threw us back into the crowds.  We descended on the slow side as there is some scree, and rocks, and it wasn’t safe to go quickly.  There are some unsafe areas next to the trail, and I would not recommend this for small children (my opinion).

An absolutely fantastic day and so glad we decided to give these trails a try! 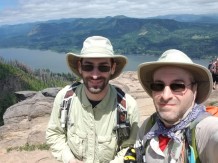 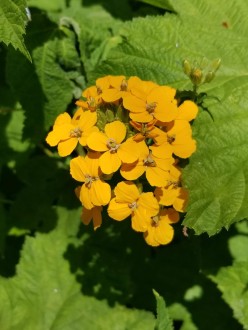 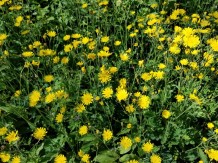 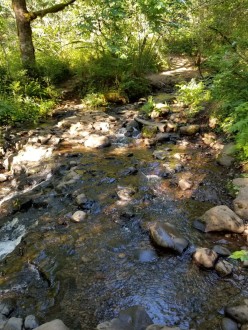 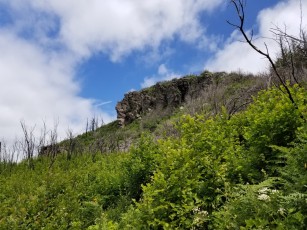 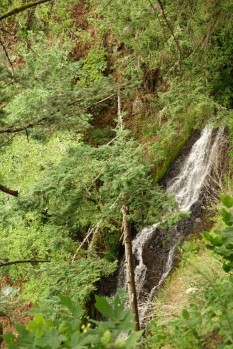