We headed out to Silver Falls State Park because we needed to meet our son for dinner, and he’s in the vicinity.  We haven’t been to Silver Falls in a while and this visit was long overdue.  We opted to hike into the backcountry as there is rarely any people in this portion of the park.

As suspected, the trailhead at the entrance to the park was a zoo.  We drove through the north entrance area and parked at the Howard Creek Horse Camp.  There were no cars parked there when we arrived, and only a few cars when we got back.  That said, the horse camp was filling up with people that have horses, but that’s not part of the main lot.

We headed out on the Howard Creek trail, intending to complete that loop.  There was a tremendous amount of overgrown trees and plants over the trail but we spent time cutting it back.  We lost track of time and found that we had made little progress in our hike, but that sometimes happens.  Instead of completing the Howard Creek Loop, we turned onto the Buck Mountain Trail, to complete a much shorter loop hike.  This loop proved to be much shorter than expected, so we also did an out-and-back on a different portion of the Buck Mountain Trail, and this allowed us to get in some extra miles.

Most people come to Silver Falls State Park for the magnificent waterfall loop, and that’s completely understandable.  We have done the 9+ mile waterfall loop a few times, but usually off season so we don’t collide with the crowds.  What most people aren’t aware of is that the Backcountry Trail System in this park is extensive.  The main draw to the backcountry is twofold:  first is that there are few people there, and we saw NO people there during our entire hike, even though the waterfall trail is crowded.  Second, the backcountry contains an immense amount of old growth forest, and I mean it is extremely impressive!  Trees with 5+ feet diameters are common, and a sight to behold!  This state park has one of the largest stands of Old Growth I’ve seen, in the middle of farm country. 🙂

A great day but we didn’t get to have a long hike, so we’ll be back in the near future.  Comfortable temperatures (a bit humid) helped make this day a pleasure. 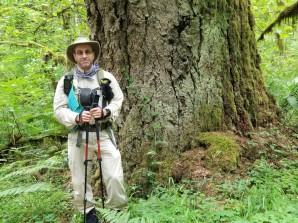 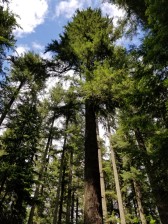