Today was quite the experience, and it was mostly not too good.  It started out with me waking up and realizing that my Zpacks Duplex tent had water condensed on the inside.  My sleeping bag was a bit wet, but not bad.  I had heard about this issue but never experienced it!

I was quite tired as I hadn’t slept well, and am not too comfortable with sleeping by myself in the wilderness, and this was only the second time I did this.  I tried staying upbeat and looked outside the tent to find it was cold and cloudy.  The mosquitoes were out in force so I knew it would be a day of fighting with the hoards of blood suckers.

I got out of the tent and got my bear canister, and took it back to the tent.  I had food and water and then started packing up.  I won’t lie, but I was not in the best mood, being alone, and wondering what the hell I’m doing out here.  Packing up, I headed north on the PCT.  Evidently, the real camping area for Brahma Lake was a few tenths of a mile up the trail.  It wouldn’t have made a difference as it was devoid of people.

The mosquitoes were ravenous and unrelenting.  As long as I walked it didn’t seem too bad, but stopping to take in the beauty, and endless lakes, was almost impossible.  My whole body was covered with Insect Shield clothing but they still found the few spaces where they could bite.  Taking pictures seemed like a chore because of these mosquitoes. 😦

In the late morning I bumped into a section hiker named Hound Dog, and his incredibly destructive and untrained dog!  He was a very nice person and very talkative.  Unfortunately, his dog was a menace and had no business being off-leash, let alone in the wilderness.  I mentioned that the dog shouldn’t be digging up large roots next to the lake but he just said “It’s fine”!!!  NO, it wasn’t fine!  Finally, the three thru-hikers I met the day before (Twister, Aquaman and Smokey) came by, and the dog was growling and being offensive.  I used their presence to make an exit!

Unfortunately, these three thru-hikers were moving so fast that I fell behind almost immediately!  They said they were staying at Dumbbell Lake, which was also my goal for the day.  We parted and I said I’d try to make it there and camp with them.  They were very nice people and I hoped I would make it.

Step by step I kept moving past the innumerable lakes.  It was no wonder why the mosquitoes were never ending.  I finally stopped to eat and hydrate, and that’s when I started meeting other thru-hikers!  I met five thru-hikers (forgot the name of two, Tough Cookie, Mango & Bluejay), and they were all very nice and willing to talk a bit!  I felt a bit rejuvenated. 🙂

After eating I moved on and saw no hikers for hours.  I again wondered what I was doing out here, with only mosquitoes as company.  I felt uncomfortable and not confident in my own skin.  My feet hurt bad as my shoes weren’t working for me.  I was also tired and my pack felt heavy, although this was expected since it was only my second day.  I was also carrying a lot of water so I could stay hydrated.

In my funk, I bumped into the three thru-hikers I’d seen a couple times (Smokey, Aquaman and Twister).  They ended their break and then moved quickly.  I told Aquaman how I felt and he stayed behind to talk to me for almost 45 minutes, at my hiking speed!  It helped me very much to get out all my frustrations, and to get another point of view.  He was so supportive, and I needed that!  At the end of our discussion he moved quickly to catch up with his hiking partners.  I was so thankful for his presence and told him so.  I later found out he was/is a minister!

After a very long day I finally walked into the camp at Dumbbell Lake.  A total of 15 miles and hiking all day got me to my destination.  When I found my hiking friends, and other thru-hikers, I felt like I hit pay dirt!  Tonight I would not be alone, or so I thought.  I ended up not camping with them as the location (on the rocky peninsula) wouldn’t support my tent (It needed to be free standing).

I talked for a long while with all the thru-hikers, and it was so nice. 🙂  They all had a routine, and had already gone for a swim, and were making dinner and had a fire going.  The place I camped already had another thru-hiker, so I wasn’t alone.  The mosquitoes, well, were nasty.  I was fed up with being bitten, especially on the butt while going to the bathroom.

I was contacting my wife with my inReach, and then the news came.  My wife’s dad had just passed away!!!  The decision to leave the trail had just been made up for me.  Tomorrow, I would get up early and hike out to the Elk Lake Resort, and be picked up by my wife.  What an end to a tough day. 😦

Meanwhile, on the Dumbbell Lake peninsula, outside my tent, there was a small concert going on.  Aquaman was carrying a guitar, and he was an excellent player with an excellent voice.  I was in no mood to be with anyone at this point, and just listened from my tent.  It was going to be a long night! 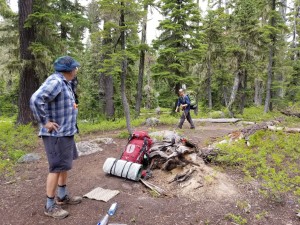 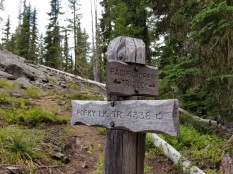