This was the last day of my PCT backpack due to my Father-in-law passing away last night!  I didn’t sleep well, but didn’t expect to given I needed to hike out early so that my wife could pick me up.  We would need to fly to Chicago due to the funeral. 😦

When I woke up it was raining!  There was no forecast for rain, but then I was in the mountains of the Three Sisters Wilderness, where weather can change quickly.  I watched a thru-hiker leave before I finished packing, which was still only 5:00 am.  I didn’t have a chance to say goodbye to the other thru-hikers as they were still asleep.  I would end up seeing them at the Elk Lake Resort, anyway.

I was walking quickly, and ended up not stopping much, due to the horrible mosquitoes that were everywhere.  I met only one other thru-hiker, on the way to the resort, and her trail name was “Goi”.  I ended up getting to Elk Lake Resort in short order, at least for me.  Truthfully, I felt drained from the poor sleep and emotional roller-coaster.

My wife was on her way but went to the wrong place, thanks to Google Maps.  I waited for hours before she arrived, and just wanted to get home at this point.  I saw the other Thru-hikers I’d been meeting the last three days, but I was surprised how much they ignored me.  It’s not a big deal but struck me as odd given how often I bumped into them for the previous several days.  Oh well, I was really never a part of the total thru-hiker group, and didn’t expect much given I’d only been out here three days.

My wife and I had lunch at the resort before leaving to drive home.  I wa surprised that Twister, a thru-hiker that was kind to me, sat down with us for lunch.  We had a nice discussion and said our goodbyes, and then took five hours to drive home.

I have such mixed feelings about this backpack.  I wanted to get off the trail, due to the horrible mosquitoes, but felt depressed having left it too soon.  I plan on backpacking on the PCT next year, but will probably do it in August, when the mosquitoes will be gone.  Unfortunately, the fire danger is always an unknown late in the summer. 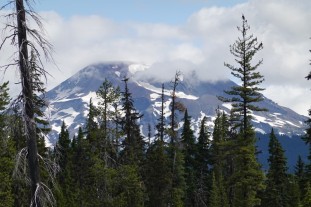