I had to run an errand in Portland so I decided to hike Mt. Talbert, since I haven’t been here in years.  I’m really averse to hiking in Oregon due to the heavy traffic that is now part of the metropolitan area, due to a huge influx of people moving here.  However, as long as I’m here I might as well enjoy one of the fine hikes in Portland!

When I got to the Mather Road parking area there was only one parking spot remaining, and I was happy to get it!  It definitely looked crowded, but the people were spread around the park, and it didn’t feel crowded. 🙂

It was such a beautiful day that I was prepared to stay out long enough to get a good workout.  I decided to hike all the trails at Mt. Talbert, although I didn’t know how far this would be.  I would describe my hike except that it was very haphazard.  Suffice it to say that I basically went around the park in a clockwise direction, and did all the side trails before moving to the next quadrant of the park.  As part of the trail system I also hiked to all the trailheads.

I was rather surprised that touching every trail in the park only resulted in only 6.8 miles, as the trail system feels big.  That said, there’s plenty of elevation in those miles for a good workout!  It turned out to be plenty of miles for me as I didn’t want to get out late.  And yes, the drive home was slow and long, and took over one hour. 😦

I can’t recommend this park enough.  The trails are well maintained but are definitely rocky in places.  I didn’t see any ivy and this was also a surprise.  This park is definitely a premium forest experience, and there are no significant views of the surrounding metropolitan area.  The only downside of this hike is that you can hear the I205 traffic, and other road traffic, throughout the park.  Also realize that dogs aren’t allowed in this nature park.  Oh, and the signage for the trail system is outstanding, with maps and directions at every intersection! 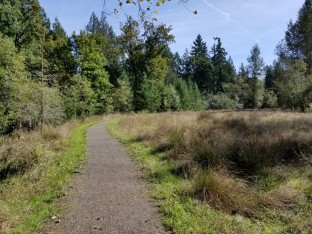 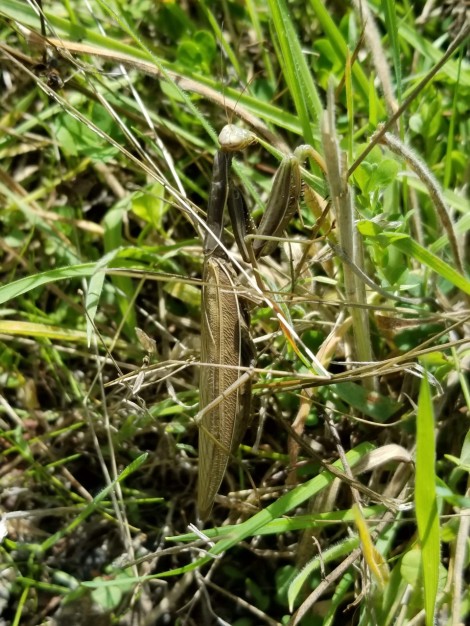 Such a gorgeous day and I decided to hike the Cottonwood Beach and Steigerwald NWR loop trail.  There is a trail at Steigerwald NWR that closes on October 1st as the birds winter in this area, and it turns into a do-not-disturb area.  My second reason for coming here is that there are very big plans for the Steigerwald NWR, and it will change the look and feel of this area forever!

The plans that I’ve seen for Steigerwald NWR is basically to remove most of the dike and turn this area back into a Columbia River flood plain.  There will be a new trail where the levee is removed.  In addition, the land just east of the closed fence will be added to the refuge (currently owned by Friends of the Columbia River Gorge?).  An additional one mile of trail will be added to this section. 🙂

So the Columbia River was very low and I spent the first three miles of my hike along the beach.  I spent considerable time walking as far west as possible on Cottonwood Beach, which was to a swiftly running stream.  I also explored the sand areas at the east end of the beach.  Large clouds made for fantastic photos!

After visiting Cottonwood Beach I walked the full length of the levee to the closed fence.  I met and talked with a nice gentleman for some time, and was also being swarmed by yellowjackets, but not stung.  I seem to be a biting insect magnet. haha

I headed back west on the levee and turned right to head out on the Gibbon’s Creek Art seasonal trail.  Almost nobody was on this trail and the solitude was wonderful!  Heading back around toward the levee gives a great view of a lake with the gorge in the background.  I didn’t see Mt. Hood and just kept moving since it was getting late.

I spent quite a bit of time taking movies of Steigerwald, since it will be changing forever.  They are already working on the Hwy 14 adjacent area, and it is now closed (until October 15), along with part of the Gibbon’s Creek Art Trail!

Such an enjoyable trail and I highly recommend getting there to see it before the changes!  That way, you can compare how see what changed when the projects are finished, sometime in 2022 (I believe?)!

It rained, then stopped, then started, etc…etc…!  It was definitely too warm for rain wear but we kept it on for the starting and stopping that occurred throughout the hike.

We’re back to walking forest roads but need to watch out for hunters this time of year.  Nobody was seen on the roads during the entire day!  The highlight of the day was the few stretches of road with complete canopy cover.  Unfortunately, no animals were seen today.

The SI joint in my back has started hurting me again and I’m frustrated with the return of pain.  I had a good solid month with no back pain but then it crept back upon me gradually until it became an issue, again.  I just saw my orthopedist and he wants me to have a pair of shoes modified so that I can increase the leg lifts to possibly fully compensate for the entire 18mm of hip height difference.  The current 9mm leg lift height has reduced my original hip height difference from 18mm down to 8mm, but that doesn’t appear to be enough to eliminate the pain. 😦

If the leg lifts can’t eliminate my SI joint pain then I will need to possibly try an experimental therapy called prolotherapy, which injects saline solution into the SI joint.  It’s not covered by insurance so my orthopedist wants to use leg lifts to fully compensate for my hip height difference.  It turns out that only about 10% of his patients don’t fully respond to the amount of leg lift compensation I’m currently using.  I guess I’m not very fortunate when it comes to this issue, and it’s definitely been a rather depressing outcome, at this point. 😦  I can still hike, and have no restrictions, but must deal with the pain that has returned.  We’ll see what the future holds, but I’m not very optimistic at this point, but there is still some hope for a better outcome. 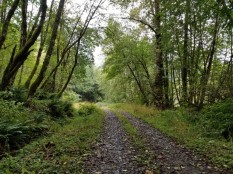 Quite the gorgeous day and we just felt like getting away from people.  We headed out to a new road area and started out hike.  It turns out that we actually had walked this road before and only about one mile of the hike was unique!  Oh well, it didn’t matter and we enjoyed the day immensely!

We saw a couple of hunters in their truck and they stopped to say hi.  They were friendly and looking for game, but hadn’t seen any.  We also hadn’t seen any animals all day.  Truthfully, we’re not hunters, and couldn’t harm an animal ourselves, but to each their own as long as we stay safe.

We also saw a mountain biker, that also stopped to say hi.  He mentioned not having seen any hikers on this road for years!!!  We were surprised to hear, but we already met three people on the road, so this area isn’t off the grid!  haha 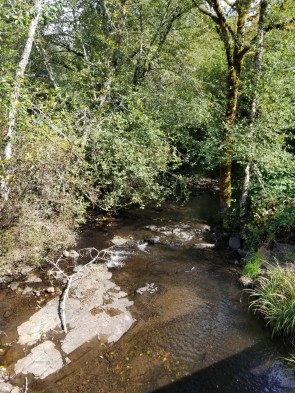 It’s been tough trying to catch up with all the trip reports that haven’t been completed.  By my count I’m 46 trip reports behind for this year! 😦  I’ll be trying to push out many more in the near future but can’t promise anything, as my schedule has been quite full and I’ve been exhausted from everything that’s been going on this summer.  I’ve also been working on home improvement as we’ve neglected our house for decades, while raising our kids, work and other responsibilities.  It will probably take years to make significant improvements to our house, and this will pull me away from some amount of hiking…at least temporarily, I hope.

I got out late for this hike, mainly due to talking with a WTA manager about all the destruction of trails caused by mountain bikers.  My take away is that there is much frustration with how aggressively mountain bikers have been both modifying trails and damaging the tread during aggressive use, despite the trails being designated for multi-use (horses, hikers and  mountain bikers).  My own experience has left me quite angry, and frustrated, with many mountain bikers that have zoomed past me at high speed, without warning and with no apology for endangering my safety.  Hikers have the right-of-way over mountain bikers but some of them (most are actually nice and considerate) clearly have no concept that others may be using the trail, and are entitled to a similarly enjoyable and safe experience.  One of my main gripes is that the aggressive riding on the trails is eroding the surface and gouging them so they’re not pleasant for hikers to walk upon.  The trails also take on a polished look and are more slippery for hikers.  Also, the forest litter (leaves, needles, pine-cones, sticks, etc.) are scoured off the surface and there is no padding for hikers, and no way for the trail to absorb some moisture, which turns them to mud during the rainy season.  Sorry for my rambling but this has been a major issue for the PNW trail systems and the organizations in charge of meeting multi-use-trail requirements are not doing their jobs, from what research I’ve done, and this is my observation and opinion after talking with some officials.  Ugh.

So, I got out late, and was wearing full rain gear in preparation for the expected heavy rain.  I quickly bumped into a very nice woman named Holly, that works for WA state.  She’s been keeping the trail system clear, and it’s much appreciated.  We had a nice long talk and then I finally set out for a nice hike.

There was no rain for the longest time, and I was overheating.  I almost took off my rain gear but then the rain finally arrived about halfway through the hike.  It rained, and rained and then became a real downpour!  I was so glad to have my rain gear, which kept me mostly dry.  haha

After talking with Holly I only saw one trail runner for the remainder of my hike.  The park was fairly empty, but then it usually is when the bad weather sets in.  I actually loved the rain, but didn’t like the flying debris caused by all the wind.  Towards the end of the hike I saw two downed trees, and wouldn’t have been surprised if it happened earlier in the day when the wind was quite strong!  At the end of my hike the lighting under the canopy was surreal, and quite spooky, but I loved it. 🙂

I took a really contorted path around the park and won’t even tray to describe it.  I must have covered most of the trail system, in order to get 7.5 miles out of the hike.  I was definitely dehydrated at the end of the hike as I didn’t want to stop and get out another bottle of Gatorade.  I’m almost always lazy at hydrating myself and need to change this bad habit. 😦

Just before ending my hike I came out into a grassy area, near the entrance to the park, and saw a momma dear and her baby!  My pictures mostly came out poor but it was exciting to see some wildlife.  A great end to this blustery rainy summer day.