My hiking friend, Marshall, has never been to this area before and so I was glad to take him on a tour of this beautiful area.  It was a very windy day and the wind chill was definitely on the cold side.

We started out by exploring the Cottonwood Beach area, which was devoid of wind due to the trees acting as a wind break.  There were Bald Eagles, and a large offspring, high up in the Cottonwood Trees,  The parents took flight and were a joy to watch!  The young one was rather large but appeared to not be able to fly. 😦  The sun reflections on the Columbia River were stellar, and I took many photos.

We headed out on the Columbia River Dike after exploring the beach.  The easterly wind was harsh, but we went clear to the end of this trail, where a locked fence resides.  We stopped for a snack, and sat on the concrete bench at the east end of the trail.

We headed back west on the dike and turned right toward Steigerwald Lake.  We explored the two bridge areas and stopped to take photos of the many birds in the area.  One funny occurrence was that we saw a Harrier on top of a post twice while walking in this area, but it always managed to fly away before we could take pictures.  Oh well, the art of photographing birds is definitely not my strong point.  haha

While between the bridges, on the Steigerwald Lake trail, we came upon a couple of large Nutria browsing near the trail.  These are basically invasive rodents that are very successful in this area. 😦  These two Nutria acted domesticated, and didn’t even move when we approached them.  We were feet away and they didn’t even flinch.  People must be feeding them, without realizing they’re basically destructive rats. 😦

Next, we headed back toward the cars and took a last side trip to Cottonwood Beach.  It was a bit longer hike than expected but very nice.  We had a great time! 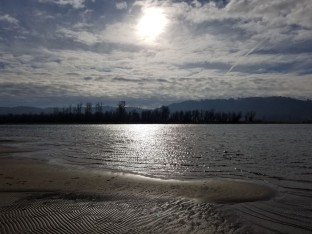