I got out so late that I couldn’t go far from home, again.  I’ve got to get out of my funk, that’s keeping me lethargic and demotivated.  The horrible political environment and constant news of the accelerating climate change is definitely depressing and robbing me of energy and hope. 😦  I’ve already detached from most news (local, national and international), and cut Facebook out of my life, but I can’t isolate myself from everyone.  Truthfully, I’m scared for my children and grand-children, and feel powerless. 😦

Well, in spite of my feelings I know that getting out into nature is the best medicine.  So I dragged my sorry butt out of the house and drove to Vancouver Lake.  The weather was rainy and on the cool side, which resulted in people staying away from here.  Good, I wasn’t in the mood to talk with anybody!

That said, a Vancouver Policeman just pulled next to me, to use the facilities.  We talked for a short while and it was a very pleasant discussion, and actually talked about my goal of hiking 25,000 miles.  A very nice person and I’m glad he stopped to talk!

I only had time for a short hike, and did the usual North Lake trail.  At the end of the trail is another east/west trail, and I turned right to see if I could make it to the lake.  Surprisingly, the lake water level was very low, which isn’t usually the case at this time of the year.  I stopped and enjoyed the view of the lake from this vantage point, and took a few pictures.

I then headed back and continued west on this trail, and came to a nice bridge that goes over a channel.  To my dismay I saw that the bridge had been vandalized with graffiti! 😦 The amount of vandalism I’ve been seeing lately is disheartening.  I saw horrible defacement of the underside of the high arch bridge at Moulton Falls yesterday, and was angered.  The huge influx of people to this county, in recent years, has really lowered the quality of life for everyone.  I know I’ve said it before, and I’ll say it again;  Everyone thinks they’re moving to such a beautiful place in the Pacific Northwest (which it is), until the infrastructure collapses and it’s overpopulated and overused to the point that it’s no better than where they’ve tried to escape from!  The Pacific Northwest is very quickly becoming the new California, and in fact, Californians are taking their money and causing housing and cost of living to sky-rocket.  Don’t get me wrong, I have nothing against anyone from California, but it just so happens that that is where the people are predominantly migrating from.  I just hate seeing what used to feel like a small town environment turn into a large sprawling suburb of Portland.  I moved away from the Chicago suburbs, in 1980, to get out of that sprawling overpopulated mess, and now I’m seeing this place turn into what I fled from.  Must be karma.  Sorry, but you can tell I’m having a rough day!

It was getting late, and dark, and I headed back to my car.  Despite what I’m writing, I still had a nice time, and saw no people on the trail! 🙂 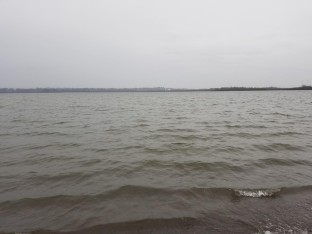