Was really surprised how nice a day it turned out to be!  We walked some roads and had some obstructed views of Silver Lake, but couldn’t get to the shoreline.  We only saw one other person hiking, and it was nice to have the solitude.  No animals seen today but plenty of horse poop on the roads.  haha  This area has no views of Mt. St. Helens, but that was okay.  There was plenty of streams running out of the forests, and the creek we saw was flowing rapidly.  This was our longest hike of the year, and it felt pretty good.  A nice day. 🙂 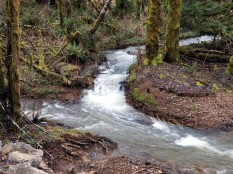 Beacon Rock State Park was on the mind of my wife and so we headed out there for a hike.  We parked at the horse camp and decided to hike to the Hamilton Mt. Saddle, and perhaps take one of the roads to the back of the park and make a loop with the Upper Hardy Creek trail.  The weather was mixed, with it being warm down low but very windy and colder at the top.

We headed up the road, from the horse camp, and ran into an old timer named Mike.  He’s a very nice gentlemen, and talks slow, but with a soft and kind voice.  We have seen him over the course of many years, and crossed paths a few times.  He’s always been fun to talk with, and today was no different.  We spent about 25 minutes exchanging stories, and it was a nice way to start the hike!

As we ascended up the trail there were areas of snow that were still hanging around, but they were easily avoidable.  We soon came to the picnic area at Hardy Creek and stopped to take pictures.  The creek was flowing fast and very turbulent, but expected due to all of the rain.  We took some pictures and continued our ascent towards the Hamilton Mt. saddle.

As we continued the ascent we met a couple of women that were heading down the trail.  We didn’t stop to talk but exchanged a few words in passing.  Continuing the ascent we came upon solid snow across the trail!  It wasn’t very deep and was easy to traverse.  This snow patch started at about 1800 feet.

We started coming around to the saddle and were greeted by stiff winds and a spectacular view!  The snow was sporadic on the saddle as this area gets plenty of sun, and rain is likely to melt away anything here.  We spent about 10 minutes moving around the saddle and enjoying the view, and taking pictures.

Snow covered all the mountains on the Oregon side of the Columbia River Gorge, and it was breathtaking.  Looking both east and west along the Columbia River Gorge was no less a visual delight, and we looking in awe of the beauty.  However, my favorite view was looking along the stretch of mountains that extended north from Table Mountain!!!  The snow coating these mountains, along with the clouds colliding with the peaks, was nothing less than an eye-gasm (haha)!  How I love the saddle area of Hamilton Mt.! 🙂

We decided to try and take one of the roads north towards the back of the park, and complete a loop by joining with the Upper Hardy Creek Trail.  Once we got under the canopy we soon came upon constant snow coverage on the ground.  When I say constant snow I mean 3-6 inches in depth, and not easy to move quickly.  We weren’t moving very quickly and realized that it would be dark before we completed this loop.  I really didn’t want to turn around but common sense told me to head back.

So, we headed back the way we came and moved quickly towards our car.  We ended up completing a small loop trail, that joined back to the main trail, to get some extra mileage.  If you want to see some nice snow, on the trail here, you’ll probably need to get here soon, before the higher temperatures melt it.  Also note that there was plenty of water flowing in all the streams, and a bunch of small falls in these areas.

Such a wonderful day, and I’m so glad my wife thought to go here! 🙂 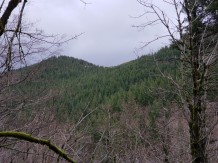 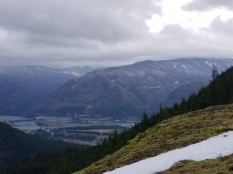 My subaru had trouble starting up, so I had to get the battery and charging system checked out.  This led to me getting a late start, and I had to stay close to home.

It rained hard during the entire hike!  I mean, it never let up.  Thankfully, my rain gear held up fairly well, and my clothing was only a bit damp at the end of the hike.

I basically hiked from the Stewart Glen TH to Hazel Dell Avenue.  I also hiked all of the side trails between these points, which added about another 1.5 miles.

The highlight of the hike was following a trail that paralleled Burnt Bridge Creek.  The creek was rather high, and another big rain would certainly cause it to rise above the banks, and flood the surrounding plains.  I also noticed that a huge amount of work is being put into restoring the vegetation around the banks of the creek.  There were plenty of new saplings and some markers for future plantings.  In addition, there must be a beaver in the area, as several of the small trees had been chewed down!

Certainly a very wet day, and more people than I expected, but plenty of fresh air and beauty!

A nice day with no wind, cool temps and no people!  It was a last minute decision to walk the roads but we had to stay close to home.  I was with my wife and son, and we had to get home early so that my son could drive back to Seattle.  My new Oboz hiking boots appear to be very comfortable, and I’m glad I found a boot other than the typical Lowa’s that I’ve used for about 10 years. 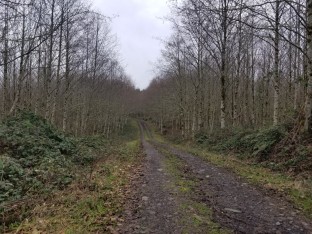 We were heading out towards a hike up Sedum Ridge, which is located in Skamania County in WA.  Once we got to the Columbia River Gorge, the east wind gusts were brutal.  Our car was being jerked around and we weren’t having fun, and didn’t feel safe.  My wife was driving and we got to just past Rooster Rock before we decided that this wasn’t a good idea.  In addition, the snow was way lower than we expected and it would be a problem for the elevation we would be hiking at. 😦

Sooooo, we turned around and headed to the Crown Zellerbach Trail, which is located in the vicinity of Scappoose, OR.  The Crown Zellerbach (CZ) trail is about 22 miles long, and we decided to park at the Ruley trailhead.  To our amazement the Ruley TH was being improved in a big way!  The lot was now paved, and there was a restroom, covered picnic areas and plenty of benches.  In addition, there is also a bike repair center there!  They’re not quite finished with the upgrade but it looks fairly close?

We headed east on the trail and walked for 3.75 miles.  There were road crossings and some homes that were walked by, but there are plenty of forested areas with no civilization to be seen.  Unfortunately, there is the Scappoose-Vernonia Hwy that parallels the trail for its entire length, so expect some road noise.

We were delighted that there was no wind and plenty of sun.  We were overdressed but that wasn’t an issue.  I tried out a new pair of hiking boots, Oboz Bridger Mid B-dry shoes.  At first they hurt a bit, but broke in after about 30 minutes!  I’m trying them to see if they improve my back and ankle issues, that my Lowa Renegade boots may be aggravating.  So far I like them, but we’ll see what happens after a dozen hikes?

There were quite a bit of walkers and bikers on the trail, but almost everyone was courteous and friendly!  The trail was rather wet and muddy, so I recommend high-top waterproof boots.  My new boots had no issues.

Since we bailed out of the first hike, and took extra time to drive to this new hike, we finished our hike on the late side.  Not an issue, and well worth coming out here. 🙂 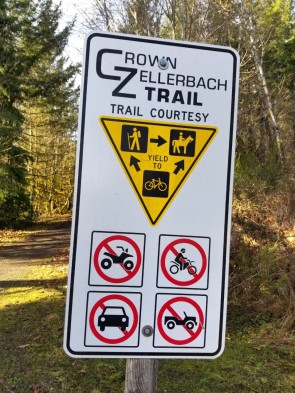